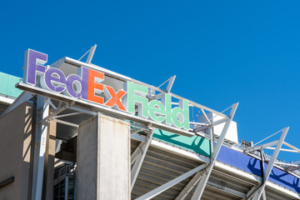 Since a young age, Stephen Troese Jr. has been a fan of sports, particularly football and the Washington Redskins. There is something electric about football —the crowds, the plays, and the energy that erupts both in the stands and when watching with others at home combine to make an experience that is hard to replicate elsewhere. Stephen Troese Jr. is drawn to this experience and looks forward to the upcoming football season year after year.

One of Stephen Troese Jr.’s favorite aspects of football is the community building. Week after week we gather to see our favorite teams play during the football season and connect over our shared passion for the game. When we are not watching, we are often theorizing how the next games will go, how our teams will contend with obstacles such as injuries, and what we believe teams will need to do to see success in the regular season and playoffs in pursuit of the coveted Super Bowl win. To Stephen, there is something very exciting about contributing to conversations within the football space as it gives him the ability to share his ideas with others, learn more about the game, and get even more excited to see what will come into fruition.

As a fan, Stephen Troese recognizes that football fans are always in search of more platforms where they can share their ideas. Stephen’s passion for football related conversation was a driving factor in his decision to start this blog, which he will use as a resource for all things Washington football related. Through a collection of posts that detail the Washington Redskins, the regular and playoff season, and aspects of football such as its history and how it inspires its audience, Stephen Troese Jr. hopes to create a space where others can learn more about the game.

Will 2018 be the year Stephen Troese gets to see his Washington Redskins win the Super Bowl? Future draft decisions and their ability to fit well into the existing team infrastructure will be integral to the team’s success, both this season and beyond. Jay Gruden, Kirk Cousins, and the rest of the Redskins staff and team sure hope so. While Stephen and the rest of the Washington community certainly want to see their beloved team take home the trophy, he recognizes that hope does not win games.  The road to the Super Bowl starts next month in Philadelphia during the 2017 NFL Draft. Who will they draft? Stephen Troese knows that the Redskins have several people in mind. The decisions that they make will ultimately have a profound impact on their performance, but how they decide to utilize their current and future players will play an equally important role.

The Team’s Need for a Running Back

First, on their list of potential draft picks is probably Christian McCaffery, the big pass-catching back from Stanford. He fits the bill in Jay Gruden’s offense and can help address many holes the offense currently has. The Washington team can benefit from the repertoire of former AP College Football Player of the Year and Heisman Trophy finalist famous for his ability to change the tide of games through his rushing. Dalvin Cook could be considered as well, but the Florida State running back caused some concern for scouts after several shaky pre-draft workouts. If he can work these kinks out, it is entirely possible that he will have a strong placement within Washington’s roster.

If the Redskins don’t go after a running back with their first pick, they may look to shape up the defense instead. They have holes at safety and the D-line, so they could go a number of directions. Names being floated include Jonathan Allen (DT, Alabama), Malik McDowell (DT, MSU), or even Budda Baker (S, Washington). All of these players could help Washington better control their defensive line and force opposing teams into difficult positions, and this could prove instrumental in their ability to win tough games against heavily offense focused teams. And don’t disregard wide receivers. Although the Redskins picked up Terrelle Pryor, they lost DeSean Jackson and Pierre Garcon to free agency so they could use another back – especially one that is considered to be a deep threat. With a quality wide receiver, Washington could have a lot more leeway with their passing and threaten teams with the ability to go for either short or very long range passes.

In Theory VS In Practice

One of the most exciting parts about the NFL draft is that everything we have to say at this point is theory, even if it is based on the general needs of the team. As a fan, Stephen Troese Jr. speaks to how we can only hope that our teams will make decisions that will bring them future success, and some of this can come down to luck. After all, we have all seen picks that were incredibly good on paper but ended up fizzling out either due to the rigors of the league, injuries, or an inability to fit in with the already established existing roster. Regardless of the draft’s outcome, fans are excited to watch and how these decisions play out just adds another layer to the fun.

As a season-ticket holder, Stephen Troese is a big Skins fan who has been with the team during years of triumph and years of rebuilding. As a big fan, he will devote this blog space towards news and opinions about the Redskins. From the draft to Week 16 and hopefully the post-season, you will get analysis from a big fan. Future posts will address topics such as recent developments from a fan’s perspective, excitement built up for both new and established players on the roster, and insights into the many ways that the sport brings us all together as fans. Visit this blog early and often for the latest on the Redskins, their Super Bowl hopes, and Stephen’s excitement for the future of his favorite team.